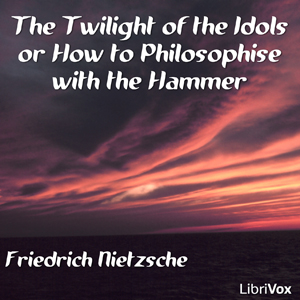 Topics
librivox, literature, audiobook, Friedrich Nietzsche, The Twilight of the Idols, How to Philosophise with the Hammer

Librivox recording of the The Twilight of the Idols or How to Philosophise with the Hammer by Friedrich Nietzsche.
Read by D.E. Wittkower

Of The Twilight of the Idols, Nietzsche says in Ecce Homo: “If anyone should desire to obtain a rapid sketch of how everything before my time was standing on its head, he should begin reading me in this book. That which is called ‘Idols’ on the title-page is simply the old truth that has been believed in hitherto. In plain English, The Twilight of the Idols means that the old truth is on its last legs.”

Certain it is that, for a rapid survey of the whole of Nietzsche’s doctrine, no book, save perhaps the section entitled “Of Old and New Tables” in Thus Spake Zarathustra, could be of more real value than The Twilight of the Idols. Here Nietzsche is quite at his best. He is ripe for the marvellous feat of the transvaluation of all values. Nowhere is his language – that marvellous weapon which in his hand became at once so supple and so murderous – more forcible and more condensed. Nowhere are his thoughts more profound. But all this does not by any means imply that this book is the easiest of Nietzsche’s works. On the contrary, I very much fear that unless the reader is well prepared, not only in Nietzscheism, but also in the habit of grappling with uncommon and elusive problems, a good deal of the contents of this work will tend rather to confuse than to enlighten him in regard to what Nietzsche actually wishes to make clear in these pages.
(Excerpt from A. Ludovici’s Preface)

This doesn't mean he negates will to power. These are two separate things: the former is like a direction, the latter more like inner energy or Jung's libido (which overflows in whatever way). (Will to power could perhaps be translated as velocity in gaining power, the latter in a meaning similar to physical.) The difference is better shown in La Gaya Scienza sect. 360.

So he negates will (consciousness!) as cause, for this is a false unity (like with 'will to truth' or 'will to go out for a walk' or whatever). It is only our interpretation; he repeats this in The Antichrist sect. 14, where he spots individual short stimulis (and perhaps man's character formed in specific conditions) as real causes.

Nietzschean criticism is deeper than just refusing the idea of free will, he negates the old psychology that sees everywhere a will (and if there is no man with such conscious will, it certainly must be the will of God...).